This has been the expression of my vow since I found the words in Bernie’s Instructions to the Cook.

“Bringing to the societal table those who have been excluded.” Maybe finding the words helped me to recognize my vow, but I have been standing up for the excluded all my life.

Particularly when I was younger, it got me into trouble, standing up to abusive, aggressive peers. I don’t remember that I was ever the target of bullying in elementary school but I was always on guard and I would manage to scream “unfair” when one of my classmates was abused. In middle school, a social studies teacher tried to pull my hair. It didn’t hurt as much as it offended. I had short hair, a “crew cut.” I whacked his arm away. He never said anything about it.

I was the maverick, the rebel, at work, standing up against whatever injustice appeared, sometimes too aggressively, sometimes tactfully. Tact was learned slowly. Some would say it remains a distant goal even today. A cursory introduction to the ethics of consequences helped to temper my righteousness, helped me develop a beginning appreciation of effectiveness as an important consideration in the response to injustice.

At ICS, I have taken pride, — too much ego still? – in embracing whoever was the in-the-news target of hate. If it was LGBTQ+ individuals, I made sure that our hiring door was open to members of the LGBTQ+ community. If it was Muslims or “illegal immigrants”, we made sure to welcome them.

We have been working hard for years to increase career opportunities for racial and ethnic minorities with the goal of achieving a faculty profile which more closely mirrors the demographics of our student body.

The first Peacemaker Bearing Witness Retreat at Auschwitz in 1996 helped to crystallize the vow, sharpened my awareness.

First they came for the socialists, and I did not speak out—because I was not a socialist.

Then they came for the Jews, and I did not speak out—because I was not a Jew.

Then they came for me—and there was no one left to speak for me.[1]

This vow unspoken has always been a cornerstone of my life, of my engagement in the Civil Rights Movement, with the Native American Solidarity Committee.

But recent developments have presented a new challenge. (They always do!)

This week we were notified of a new NYC Health Department edict. Members of our staff who are not vaccinated can no longer be admitted to our building.[2]

I had been happy with the plan which we had arrived at which was allowing us to safely bring almost all our students back to in-person instruction. Staff who were unvaccinated were required to be tested weekly for Covid. This plan respected the need and/or desire of a significant minority not be vaccinated while providing reassurance of safety to the majority of staff. This plan had been in operation for three days when the new directive appeared.

Now we are told that these colleagues must be excluded. This hit home for me in a way that the threat to exclude them from restaurants and concerts did not.

I had felt that I would be more comfortable eating out if only the vaccinated could come into the restaurant. Last winter, unable to risk in-door dining, I looked forward to the possibility of getting together with friends to break bread this winter.

“To bring to the societal table those who have been excluded.”

There are sixty staff members in our schools who are unvaccinated. Although many were undoubtedly irritated initially by our requirement for them to be tested every week, I think they have all come to appreciate the option.

Now as I looked at the list of the unvaccinated, I see a number who report directly to me. Now that hits home in a different way. They are no longer a nameless minority. My mind is going immediately. I am thinking of how their job responsibilities can be restructured, reorganized so that they can continue to work at our schools without entering the school building. Not always easy. But I am committed to find a way.

And then almost in the same moment, I am aware of the unfairness of my reaction. Why should the people who work most closely with me, who I feel closest to, get the work-around while others do not? What am I feeling? Shame? Guilt? How can you be so self-centered?

And then pretty quickly, another thought arises. I am remembering Pema Chodron’s instruction on the Metta practice: how to develop loving kindness.

Pema advises that we cannot begin with loving kindness for everyone. That, she teaches, is an advanced practice. We must begin, every one of us, cultivating compassion for ourselves. That is the essential first step, and it is not as easy as it sounds. I have been working on this step for thirty years, since the I Ching sage helped me learn to sit for thirty minutes by telling me to stop judging my zazen. I am still working at it.

I have been teaching this, in the smallest details. Zen students count their breath. Minds wander. “Bring your attention very gently back to your breath.” The emphasis on “gently” is crucial. Treat yourself with compassion.

As I have practiced, my compassion for those closest to me has grown, continues to grow. The circle of compassion has expanded.

There was an initial harshness in my reaction to the unvaccinated but in relationship with colleagues who I work with, my harshness softens. My heart opens.

And as my heart opens to my circle of closest colleagues, I find it is opening to the larger circle of staff with whom I don’t work as closely.

What a terrible situation some people are finding themselves in, facing the possibility of needing to choose between health risks, religious or political commitments, and the threat of losing a job which they love.

Even as president of ICS, I am not in control of the political environment in which we operate. But I will try to make sure that we find ways for people who cannot get vaccinated to continue to work without entering the school building.

I am outside of the school building after dismissal talking to one of my colleagues with whom I work most closely. He doesn’t believe in the vaccine. He has been tested for anti-bodies. He resents the governmental intrusion.

I do understand. Which is amazing to me. Wonderful actually. Because I don’t really understand intellectually, even as I am softening. He is being put in a situation in which he feels powerless.

But I also feel that he feels something different from me. I am feeling an appreciation of a position which is different than my own and which I experience as a gut level as threatening.

I do still feel that we would all be safer if we all got vaccinated. It still seems to me that the overwhelming preponderance of scientific opinion favors the vaccination campaign.

My compassion is growing through the practice. My heart is softening beyond those closest to me, to a widening circle. Compassion for the frightened. This is new, rather beyond dismissal of their fears which are not mine as irrational. There are still those who fall beyond my circle of compassion, my “enemies”, the people who evoke “hatred”. Perhaps, as Pema suggests, my compassion will someday extend to them.

Meanwhile, I don’t have to beat myself up for still being a Bodhisattva in training.

[1] Martin Niemöller. “Niemöller was a Lutheran minister and early Nazi supporter who was later imprisoned for opposing Hitler’s regime.” https://encyclopedia.ushmm.org/content/en/article/martin-niemoeller-first-they-came-for-the-socialists

[2] The actual effective date of this edict is still a week away. 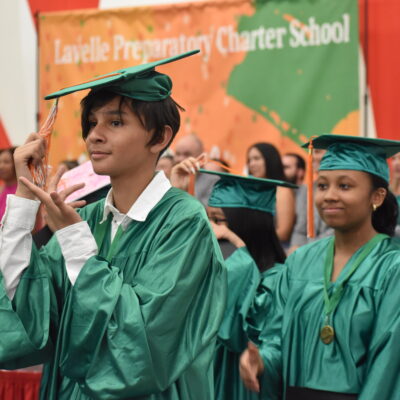 Congratulations to Lavelle Preparatory Charter Middle School’s Class of 2022, whose commencement ceremony was held at St. John’s University on Monday, June 27th. A Message to the Class of 2022...