Stumbling into the magic of success is not something to be taken for granted.

It has always seemed to me Bernie made that mistake, taking what he had accomplished in Yonkers for granted. Greyston, during Bernie’s tenure as founder and leader, was becoming a beacon of engaged Buddhism and social entrepreneurship, a rare blending of for-profit and not-for-profit entities as a force to dramatically change the lives of many of the most disadvantaged. Leveraging the growing success of the bakery business, Bernie was building a network that included housing for the formerly homeless bakery employees and daycare for their children and was expanding its reach to include services for people living with AIDS.

Bernie walked away, it now seems, for complex reasons. What was clear to me at the time was that Jishu wanted out. Bernie and Jishu went off on a well-deserved vacation, and Bernie was expecting to convince her to withdraw her resignation, to continue, to continue to work at Greyston. They returned having made the decision that they were both going to quit. They would focus their energies on building the Zen Peacemaker Order.

As Bernie told it to Paco, as long as Bernie was in Yonkers, community leaders, politicians, would always come to him. As Bernie told it, he needed to get out of town to create space for Chuck Lief who Bernie had installed as Greyston CEO, leaving Bernie free in a newly created Office of the Founder, to do all the creative visionary work in which he excelled.

Chuck’s recollection is that the politicians were coming to him. In some ways, the glow of Bernie’s role in Yonkers may have been fading as he withdrew from the active, day-to-day leadership of Greyston operations. Bernie’s ego may have been bruised. In Chuck’s words, “There was only room for one Sheriff in town.”

I thought that Bernie walked away too soon, that the opportunities that were beginning to unfold in Yonkers would be lost. Bernie, I believe, was absolutely convinced that he could repeat the Greyston success elsewhere.

I always doubted that. On some intuitive, largely inarticulate level, I appreciated the magic of success.

I was awed when Bernie almost did it again in Springfield, Massachusetts, working with the Springfield Sheriff to create a mandala of organizations and services to support young people coming out of the jail. They lost and left behind. It was a thrilling moment to spend a day at the jail with Bernie. Back on Staten Island, I couldn’t stop telling people about what Bernie was doing.

And then the Springfield initiative fell apart. Even for someone with Bernie’s charisma, catching the magic was not so easy.

As we began building our schools, I always appreciated the magic. I was not doing this. This was a miracle in my life, to be involved in such an accomplishment as a second career when most of my friends were really, really, really retired. It wasn’t me. I was channeling the universe.

Looking back now, we have three schools in operation, a fourth about to open. Although related by mission and by key design elements, all of which have become clearer as we work, each school is unique, a new offering. I am proud of the ways in which each of these schools is meeting the needs of students and families but only one, New Ventures is blowing the doors off the building.

Success in the charter world is more than just satisfying the customers, our students, and their families, more even than also satisfying our teachers as well. Successful charter schools need to be successful businesses. And they need to meet the success criteria of the State authorizers who grant charters. New Ventures, our transfer high school, is the only one that is succeeding wildly on the State performance criteria. I had no idea that New Ventures was going to be the overwhelming success that it is.

Magic. So far we have three prototypes in various stages of development, one of which may be a scalable school design. New Ventures offers a huge upside, not just because it’s successful but because it occupies a critical, vacant space on the national education landscape. “Transfer high schools,” –that’s what they are called in New York, — serve students who are failing in or who have already dropped out of traditional high school settings, generally large schools with traditional instructional models. At the core of these models is the expectation that students are self-motivated to pass tests and achieve good grades and graduate, or are motivated to do so by their families. Motivation, in these settings, is not a school responsibility. Schools don’t have to be interesting, engaging, or fulfilling, any more than factory work, maybe most work is interesting, engaging, or fulfilling.

New Ventures breaks away from the traditional model, and the structures and processes, often the micro-processes through which this is done is the special sauce of the New Ventures success. Some of these ingredients were planned. Some were found by students and faculty in course of their collaborative work together.

Scalable? Although we have no way of knowing if we can do this, until we do it, I can see clearly how unusual it is to get to this place. Definitely magic.

And yet I am facing a point in my life where other opportunities beckon. I am getting older. There are other things I want to do.

Travel. Living through the pandemic, I wonder, when will the possibility of travel return? More writing. More time with Diane. Longer walks. Some days I am catching a glimpse of the end of my time in leadership in this wonderful enterprise and its incredibly exciting possible future.

I look back now and I imagine that maybe Bernie had reasons to leave Greyston that I had not really appreciated or understood at the time. There were other things that he wanted to do in his life. Travel more. Spend more time with Jishu. Take a stab at channeling the Zen Peacemaker Order. I know all this was true. But I didn’t really appreciate it.

I was much younger then. Jamie wasn’t born yet. It would be years before we opened our first school. It seems that I have lived a whole lifetime since Bernie and Jishu left Yonkers. 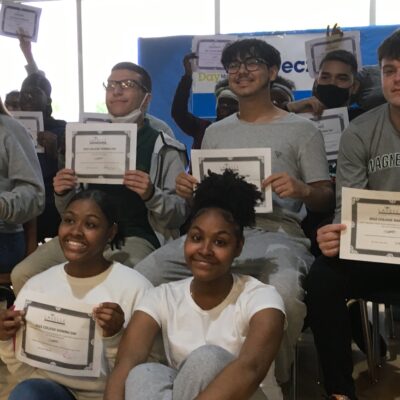